Well, it’s been a long few days, but without furthur ado, let me introduce you to Tobias Spencer Oelkers: 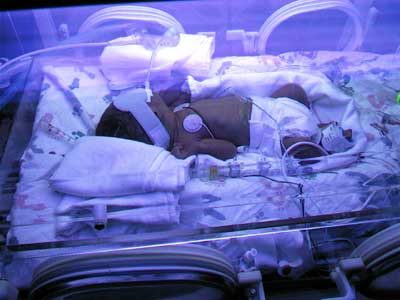 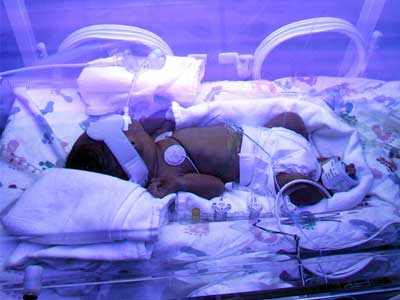 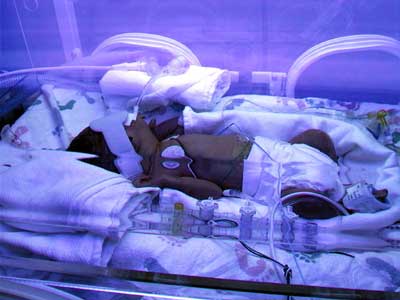 More at a later date, but right now daddy needs a few hours of catch-up sleep!

ps. The images are blue because he’s under some blue lights – he’s just a tad jaundice right now.

If you hadn’t heard (and why would you have, since this is post #2 on an unknown blog from an unknown author), the wife and I are having our first baby, *finally*. Our mothers (and our fathers, but especially our mothers) are very happy and relieved – we’ve been married for over six years and they were starting to worry that they would never see grandchildren. Not as if we’re both ancient or anything – she’s 31, I’m 32 – but we’d also dated for many years before we got married, so they were probably expecting to hear some news a little earlier than they got it! 🙂

So, May 19th, give or take, another life will be joining ours, and I’m vacillating fairly regularly between excited as hell and scared to death. Probably a fairly common feeling. Definately going to be a big change in our lives, but one we’re as ready for as we ever will be. Change appears to be the theme as of late. (_will likely elaborate on that last bit in a later post_)

Anyway, I’m also the proud owner of a fairly new vice (to me) – cigar smoking. I was given a very good one last January by a client which rekindled an old interest I had in them from my college years. Since then I’ve been collecting and smoking them on a regular basis. Anything from the cheapest bundled cigars to some ridiculously high-priced (would say over-priced, but they are just barely that damn good to justify the cost) Cubans.

Needless to say, a new baby needs some celebratory cigars, both for the new father to pass around and for some contemplation on dad’s new primary job.

I’ve already decided on at least the brand of the pass around cigars – some rather tasty ones out of Nicaragua called “Cupido Criollo’s”:https://www.cubancrafters.com/bybrand_list.php/catid/25/. Great taste, and the cherub-in-a-heart band is almost too fitting. The vitola is another matter. Depending on my mood, I either go for a fairly small smoke ala a robusto or corona; if I’ve got the time, I really like a long smoke ala a churchill or double corona. I’m thinking the small route would be better, considering the majority getting handed out probably won’t even be smoked by their recipients – why burden them with a giant cigar? 😉

But the real dilemma is what I should smoke. Following the advice of a few BOTL(Brothers Of The Leaf) at my “favorite cigar board”:https://forums.cigarweekly.com/, I’m going to pick up a box of some very nice Cubans and partake in some contemplative bliss just once a year on our little one’s birthday. Or, maybe a couple boxes, and have one at birthdays _and_ other memorable events in his/her life. So many to chose from, and closing in on crunch time, so I’ve got to make a decision soon! Here’s what I’ve whittled my list down to so far:

* Cohiba Double Corona Edicion Limitada 2003 (about as expensive as can be, but possibly the best cigar I’ve ever had!)
* Trinidad Fundadores (just an all-around classic cuban)
* Ramon Allones Gigante (never have tasted this one, but love all my other RAs, and considered a great cigar)
* Partagas Lusitania (again, simply a classic cuban)

So, if you happen to stumble upon this post sometime before the big day and have a feeling one way or another, feel free to suggest away. Either that, or I’m going to have to get all four because they all sound damn good to me… 😉

I initially bought this domain six months or so ago with the intention to use it as a test bed for various “PHP”:https://www.php.net/ programming experiments that occassionally infiltrate my brain, but real life intervened and I never got around to fleshing out the site. I’ve haphazardly looked at one blogging software or another whenever the mood struck me, but just never got around to going beyond the ‘install on local server and check out the default setup’ phase. Until now, that is…

Just recently, I started looking at several other pieces of blogging software yet again – who knows, maybe this time I’d actually set something up outside of my home lab! I took a look at “Movable Type”:https://www.moveabletype.org, but even though it’s very well received, I just couldn’t seem to get myself to use a piece of software written in a language that’s as alien to me as Russian…

Checked out “b2”:https://cafelog.com/, and yes, written in PHP, but it didn’t look like anything was being done with the software as far as updates, and abandonware is just not my thing…

Then noticed “WordPress”:https://www.wordpress.org was picking up where b2 left off, and messed with it for several days, seemed like I might have found a potential match. But then…

I had noticed “Dean Allen’s”:https://www.textism.com/ “Textpattern”:https://www.textpattern.com/ many moons ago. Even grabbed a copy of it when it was in beta and did the local server thing. Looked promising, but thought I’d wait until Dean put a more finished product out before I could commit to using it. And then he goes off and rewrites the whole thing from scratch over several months (not complaining at all if you ever read this Dean – it’s working beautifully and was well worth the wait). Forgot all about it until one day it pops up again all over several feeds I follow. Time for another look – and lo and behold, it looks like we have ourselves a winner!

So here we have it, “marginal ideas”:https://www.marginalideas.com/ is finally getting a little content. Normally it’d be some time before I’d set this thing out to the world since I’m way too much a perfectionist for my own good, but I’ve got to break that habit and just do (or it’d be _another_ six months before anything would be here). So this thing’s going live right now, and I’ll worry about getting the look ‘just right’ as I go along.